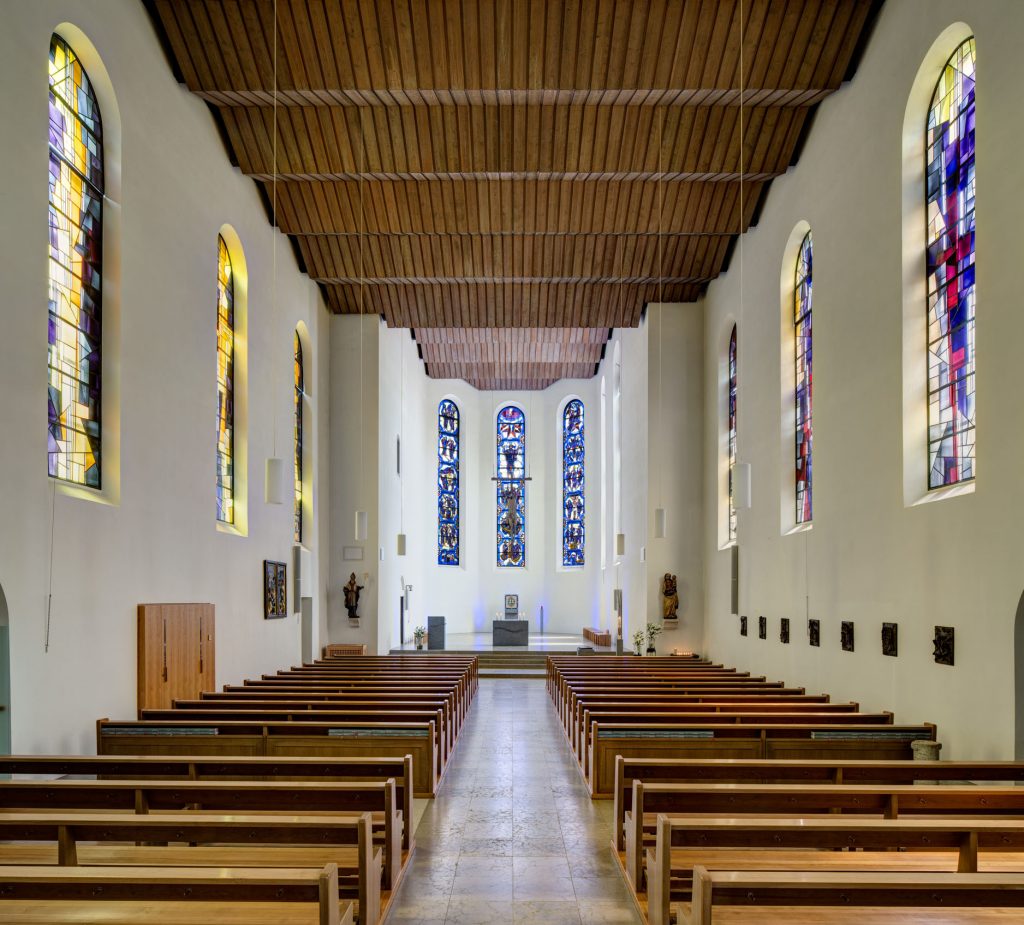 The Church of St. Nicholas, Friedrichshafen

The present-day city of Friedrichshafen was named after King Friedrich I of Württemberg. After secularisation in 1806, Napoleon granted him a monastery and ownership of the Benedictine provostry in Hofen (palace, palace church and Hofen village). By decree on 17th July 1811, he united Buchhorn town with Hofen village and monastery and named the new town „Friedrichshafen“.

In the medieval era there were several chapels in the present urban area. The parish Church of St. Andreas was already standing in Hofen at an early date. The first mention of a chapel of the same name was in 1293 and then in a document dated 26th May 1325 on the very spot where the Church of St. Nicholas stands today. From 1437, the citizens of Buchhorn extended this chapel and built the tower and the Gothic high choir.

During the Thirty Years‘ War, the Hofen parish Church of St. Andreas was completely destroyed by the Swedes, therefore the Church of St. Nicholas became the parish church. In 1689 it was extended and instead of the Gothic style dome, the choir and nave were given a flat ceiling. Over the course of the 18th century the church (except for the spire) took on its final shape.

With all its art treasures and together with the rest of the old town, the church fell victim to the bombings of the Second World War and was then burnt in the devastating fire on the 28th April 1944. All that remained of the church was a burnt-out ruin and in the middle of it was the tabernacle, which had been made a few years before, bearing the inscription: „Behold, I make all things new“.

In August 1946, the reconstruction of the church could begin, and on 11th October 1949 the new consecration of the church was performed by the Confessor Bishop Carl Joseph Leiprecht. The interior assumed its present-day form in 1960 under the direction of the Friedrichshafen architect Hanns B. Schlichte. In 1987 it was remodelled under the Friedrichshafen architect Manfred Oberschelp. Together with the parishes of St. Petrus Canisius and St. Columban, a Pastoral Care Community was formed in 2001 with the participation of the other language speaking parishes, Sv. Leopold Mandic and S. Caterina da Siena. The altar area was redesigned in 2011 and shortly thereafter a Pastoral Project resulted in the „Open City Church“. The „Open City Church“ symbolises distinctive church music accents, new diaconal approaches, and alternative forms of pastoral care in the „Listening Place”. The former mother parish of all present inner-city parishes now comprises just over two thousand baptised Christians. 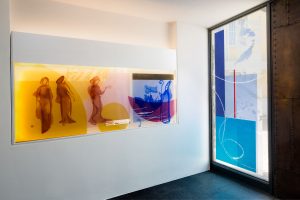 The stained glass in the Narthex (church entrance area) by Tobias Kammerer from Rottweil captures symbolic images from the life and legends of Saint Nicholas. The colours of the stained glass paintings, which are already visible from the outside, invite passers-by to open the door, to enter, to look and to allow it to take effect. The recently created area and the stelae invite the passers-by to linger for a while. The stelae provide information and stimulate our Christianity and humanity in our everyday lives with thoughts that sometimes change weekly.

The Liturgical Places in the Choir and their Significance 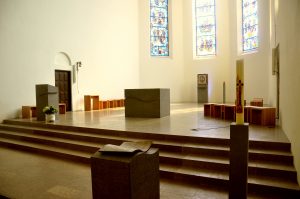 The three Liturgical places are in striking contrast to the light-filled nave and choir area, which are amongst the oldest parts of the church: altar, baptismal font, and ambo. They were designed by the sculptor Hubert Kaltenmark. A prominent common feature of these works is the combination of blue-grey granite and metal chosen by the artist. The metal elements were deliberately chosen with reference to the industrial city of Friedrichshafen and were incorporated into the stone as a powerful wave. This creates a tension and at the same time a connection between the three places. The three elements also form a single entity in that they are all cut from a singular block of granite. In addition to their dynamism, they convey a feeling of tranquillity, clarity, and order, which the believers can be gripped by.

The altar brings together the forces that are active throughout the church. It was not only set down on the floor, but it was also lowered. Jesus Christ has become the bedrock and cornerstone (Eph2:20) and invites us to eat together. This is the reliable ground and the place where life and grace are at stake. Everyone can come as they are, no matter whether they have accomplished much in their life or whether some things have failed. In the Eucharist, a Christian celebrates how in his Son, God heals the rifts of man and the world. The real agent is Christ himself, who through his death and resurrection has opened Heaven for all and invites everyone to celebrate this. At the same time, the altar becomes a boundary stone between Heaven and Earth, a place that signals: Here you can stand by your own limits, you don’t have to create Heaven yourself, you can let it be given to you. The relics that were placed in front of the altar come from the martyrs Lucens and Desideria, who were originally buried in the catacombs of Rome. The reliquary bears the seal of Johannes Baptista Sproll (1870-1949), bishop of the diocese of Rottenburg-Stuttgart since 1927. 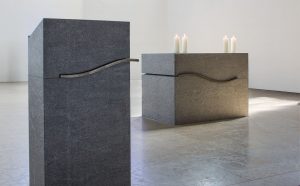 At the Ambo, God’s Word is spread out into the world and continues to work in our daily lives. Sometimes God’s word will take us along and carry us, at other times it will provoke us. The wave points beyond the Ambo and is continued in the waves on the altar and baptismal font. The baptised Christian, who is moved by the Word of God, celebrates this in the Eucharistic supper and gives this enthusiasm place in his everyday life. The Second Vatican Council (1962-1965) rediscovered and revived the Ambo as the table of the Word of God, next to the altar, the Sacramental Table. It was re-emphasised that the Table of the Word and the Sacramental Table form an inner unity, because Jesus gives himself both in the proclamation of the Word and in the Eucharistic supper. Through his presence in the Word and in the Sacrament, he wants to inspire us to live out of his proclaimed and practised love. 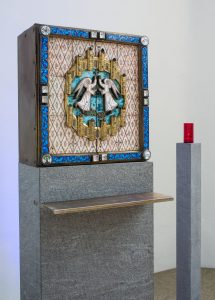 Designed by Fritz Möhler from Swabian Gmuend, the Tabernacle represents the heavenly Jerusalem, the world which has already been transformed. It is located on a stele by the artist Hubert Kaltenmark, which in its design corresponds to the other Liturgical places. While the church was largely destroyed during the Second World War, this tabernacle survived the firestorm of 1944 almost unscathed. Its inscription encourages and maintains the promise: „Behold, I make all things new“ (Rev 21.5).

Away from the street noise and hustle and bustle, the Room of Silence invites you to come to rest. The room is bathed in a friendly, warm light by the „Burning Bush“ glass wall designed by Roland Peter Litzenburger in 1962. Artistically, it portrays the story, which in the book of Exodus is one of the most important in the Bible: Moses meets God in the desert among the burning thorn bushes and through the fire he learns his name, which runs throughout the story as a red or golden thread: „I am who I am „. The golden threads in the red walls are barely visible and refer to this hidden existence of God, which transforms sometime in the desert into a time of grace. There is a ship made of gold in the middle, on which visitors’ light candles with various intentions. This ship reminds us of the legend of Saint Nicholas, who managed to avert the threat of famine for the people of Myra with a shipload of grain sacks. 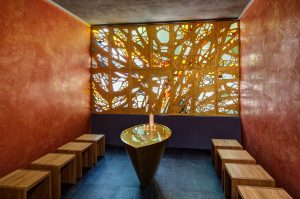 uary. The design was made by the Ulm artist Wilhelm Geyer (1900-1968), whose artwork can be found in churches from Lake Constance to the Lower Rhine. The intense blue not only reminds us of the heyday of Gothic stained glass, but also symbolizes just as impressively the arrival of the Heavens in our world at the lake. God cannot be represented in his entirety, but faith allows us to recognise his mark. In the middle window his hand points from Heaven to his beloved Son. He is the agent in creation and in history, and through his Son transforms the history of humankind into a history of salvation. Through the Holy Spirit he continues to work in the church and within the people who fulfil his mission. He wants to be sought and found and can be seen as a dove in the windows at the top right and left. The lower part of the middle window depicts the calling of the disciples, who from now on will be fishing people. They will be guided through storms, even when the saviour appears to sleep in the boat. In the scene above, Peter accepts the Pastoral Office from the hand of the Resurrected One.

On the left and right window, the artist captures the life and work of the patron saint St. Nicholas in two scenes within a very small space. The artist relates these events both spatially and in terms of content with the scene depicted above about the life of Jesus and Mary. The transformation of the life of the People‘ s woman begins in the upper left

window with the Annunciation of the Angel and ends with the great praise of the Magnificat: „My soul praises the greatness of the Lord …“ when Mary meets her cousin Elizabeth.

In the centre of the middle section, we see Christmas, birth of Christ, and beneath it the three wise men bringing their gifts. Finally, at Simeon, three generations meet. In the temple, Mary places the child in the arm of the old man, who announces Jesus with praise as the “ light for the enlightenment of the Gentiles and glory for the people of Israel“. On the right window, the jugs at the very bottom just above the image of St. Nicholas, recall the source and transformative power of the Saviour not only at the wedding at Cana, but in all earthly situations where adversity calls for transformation. Mary is already present at this first miracle, and she accompanies Jesus on his journey of love all the way to the cross. In the window above, we see how she is gifted with the Spirit of God in the midst of the disciples, so that she can continue to carry his message as a church even after his death. Her journey on earth is completed with her ascension into heaven and her coronation. In this way she has become our advocate and mother in faith with her Son and heavenly Father.